Screenwriting Tips: What is Plot?

When describing their projects, aspiring screenwriters often hear many of the same questions:

Many writers begin describing their plot as a sequence of events. They treat the plot like a series of stacked dominoes knocking each other down and creating a beautiful pattern as they fall. The difference between a sequence of events and a plot is this: falling dominoes create a sequence of events; a couple sharing an intimate moment in the same room as the dominoes and causing them to fall is a plot.

Numerous screenwriting teachers subscribe to a particular structure when instructing students on how to develop their plots. Some of the most notable include Syd Field's three-act structure, Blake Snyder's “Beat Sheet” and Chris Soth's “mini-movie method”. All of these structures are highly useful in developing a plot, but they are not intended to act as substitutes for a plot, nor are they meant to place limitations on an original idea. The structure serves as the dressmaker's dummy, but the designer must still wrap, stitch and cut the fabric to make the dress to fit that dummy.

Writers in some genres feel compelled to use their plots as the means to deliver a sermon, rather than to tell a story. As the legendary producer Samuel Goldwyn was quoted as saying, "If you want to send a message, use Western Union." The main function of a plot is to show the character's journey, not to hector an audience into following the writer's beliefs. On the other end of the spectrum are the writers who confuse plot and theme. These writers see the primary function of the plot as a means to make grand declarative statements on the nature of humanity, relationships and the universe at large. While such efforts can appear to be deeply philosophical and artistically ambitious, they still fail to serve the main goal of a screenplay: telling a story. Here's a hint: if the logline or description includes all “being” verbs (is/are/was/were) and no “action” verbs, then you've written a thesis, not a screenplay.

Another big mistake rookie screenwriters make is that they use their plots to move their characters around like pieces in a board game. They see the characters as servants of their overarching plot, not masters of their own lives. Audiences want to see active characters, not puppets jerked around on strings by an omnipotent puppeteer, even in movies that feature puppets. The best scripts have characters that drive the action, not ones that sit in the passenger seat and wait for the inevitable collision. 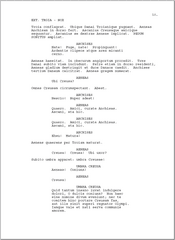 If you want to learn how to find the plot in your story, contact us at StoryIntoScreenplayBlog [at] gmail [dot] com. We specialize in turning stories, concepts and ideas into screenplays that you can present to agents, managers and producers to launch your screenwriting career.