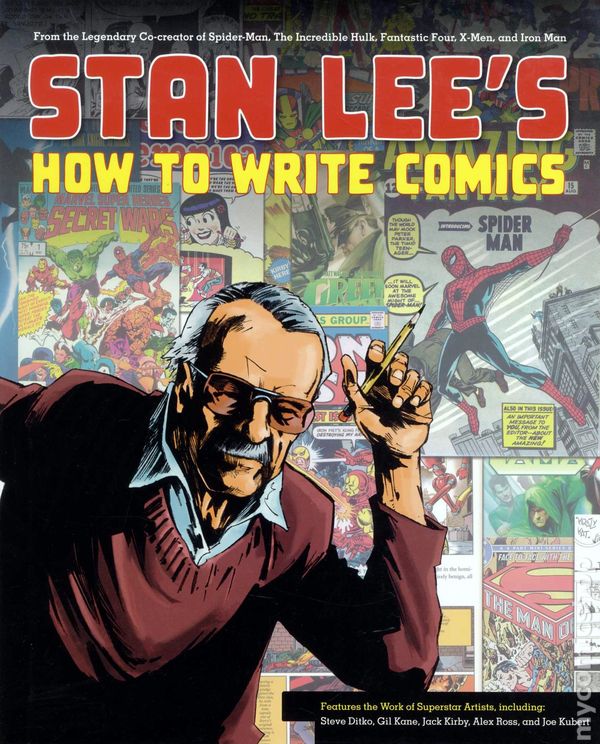 For someone who never wrote a produced screenplay, or directed a single scene, and only appeared in films through his famous cameos, the late Stan Lee made an undeniable impact on screenwriting as we know it today.

In his 2011 book, Stan Lee's How To Write Comics, Lee put forth several useful pieces of advice for writers in any format, and in any genre. In memory of his tremendous legacy to creative writing, this entry will present “Stan Lee's Top 10 Tips for Writers” from page 54 of his book (emphasis mine).

“1. Write about things you know. If you don't know, Google the stuff and start learning. Or else be so vague but no one can pin you down -- like when I dreamed up Bruce Banner becoming the Hulk do to a gamma bomb. I don't know any more about gamma bombs than I do about brain surgery, but I didn't try to explain how it worked. I just said that he became the Hulk because of gamma radiation. Hey, who can find fault with that? At least it sounds scientific. So, to summarize - be totally factual, or else be so vague that you can get away with knowing nothing about your subject. But whatever you do, don't try to fake it.

“2. When you’re reading a comic book, or watching a movie or TV show, don't just get caught up in the story and sit there like a couch potato. Try to analyze everything that's on the page or screen.

Why did the writer add that did a dialogue?
Was it more dramatic for the hero to say nothing in that particular scene?
Why didn't the writer introduce that important story element until 15 minutes into the film, or until 5 pages into the story?
Why did (or didn't) the writer have such an enigmatic ending?
Why, in that movie, was Act Three so much shorter than Act Two?
Why, in that comic book, did the writer use so many captions on pages 3 and 4 and no captions at all on the next six pages?
Why so many long shots or close-ups?
Would it have been more interesting the other way around?

You should be able to learn something new about writing every time you read a comic or watch a film -- if you remember to analyze everything you see.

“3.  Keep writing. I figure writing is like any other activity -- like swimming or jogging or sex. The more you do, the more you enjoy it, the easier it becomes, and the more you improve. If you find yourself getting bored writing, or tired of it, there's only one answer: Find another career.

“4. Write about things that interest you. If you write about subjects that for you, thinking that's what the market wants, you'll just end up writing boring pages. The more interested you are in your subject, the better chance you have of making the subject more interesting, too.

“5. Try to write at the same time every day. Writing can be a habit, like anything else. If you stick to a schedule, it makes it easier to turn pages out like a pro.

“6. Stop writing if you find yourself getting tired or bored. Take a nap or short walk to wake yourself up. You can only do your best writing when you're mentally alert and interested in what you're doing.

“7. When you finish with your script, proofread it carefully. Don't read it as if it's your baby and you love every word of it. Pretend you’re the world's toughest editor, looking for every fault you can find in story structure, dialogue, characterization, and motivation. Be as tough on yourself as humanly possible, because that's how your editor will be. And keep rewriting until your script is as good as you can possibly make it.

“8. In writing dialogue, try to give every character a different way of speaking. In any script, it's boring to have the characters all speaking the same way. Think of people you know -- how they speak, their verbal idiosyncrasies and mannerisms. Remember, nobody speaks exactly the same as anyone else. When listening to people conversing, train yourself to pick up all the subtle nuances of dialogue and use those varied nuances in your writing.

“9. Make your characters interesting. Sounds obvious, doesn't it? Well, failing to do that is one of the main reasons so many scripts are rejected. Reading a script is like visiting people - the people in the story. You wouldn't want to visit dull, colorless people, would you? You wouldn't want to spend time with bores. The characters you write about must be interesting, colorful, and unique in some special way. They must have problems we’ll care about -- and solutions to those problems that we can't wait to see.

“10. Don't get discouraged! Lots of really good, successful writers didn't make their first sale until long after they started writing. Of course, if you've been unable to sell anything for years and years and are now starving and homeless, you might start thinking of another vocation. but short of that, stay at it -- tomorrow may be your lucky day!”

Following these tips may not guarantee you a career as successful and as prolific as Stan Lee's, but it's all still sound advice, nonetheless.

For anyone who has ever picked up a comic book, bought a ticket to a movie, or watched a Marvel TV show, we all owe a debt to Stan Lee. The best way that we can repay that debt is to follow his advice and create our own universes of amazing, spectacular, incredible characters.

If you're looking for help in creating your own universe of characters, Story Into Screenplay can help. We offer coverage reports, script consultation, and rewrite services for aspiring writers in all genres. you can reach us at storyintoscreenplayblog [at] gmail [dot] com, or you can message us through our Facebook page.

Posted by Story Into Screenplay at 3:54 PM