One of the aspects of screenwriting that new writers, especially those transitioning from other types of writing, is that screenwriting is, first and foremost, a visual medium. While the emphasis on characterization and story structure cannot be under-emphasized, the purpose of a screenplay is as a blueprint for making a film, not as an example of literary writing.

With this in mind, one of the ways in which screenwriters can better understand what it takes to turn their script into a film is to learn about the other aspects of film making. On a recent trip to a used bookstore, I found “Smart Phone Movie Maker” by Bryan Michael Stoller. Although the box contains a film making kit designed for grade-school children, it also contains useful information for adults who want to learn more about the technical aspects of screenwriting.

The projector box may be more suited for a child’s bedroom than for a living room, since the smaller box and shorter lens tube lack the focal length needed for large-screen projection. The kit requires that the phones be less than 78mm (about 3 inches) wide, so larger smartphones won’t work with it.

Also, users have to reset their phone screen to landscape, both upside-down and mirror-image, to ensure the proper picture orientation when projected. This often requires downloading a separate app to get the right orientation. Kids can also put together the stenciled accessories to create their popcorn boxes and tickets to their “premiere” event.

For adults, the key components are the two books. The main book includes some important ideas that screenwriters should keep in mind.

In the section on genre, Stoller writes, “Make the kind of film you like watching.”  For writers working on spec scripts, this advice often goes unheeded, as they seek to chase market trends rather than write something that captures their interests.

With the amount of work that goes into crafting a workable screenplay, any writer who works on a spec script that doesn’t pique their interest is wasting their time and talent. After all, if the writer doesn’t like the story, how will they convince anyone else to invest in it?

Another valuable piece of advice comes in the section “Beginnings and Endings”. In the “Hints and Tips” section, Stoller writes, “Write less rather than more...Ask yourself: ‘What does my character want? And why can’t he get it?’”

If only there was a simple mnemonic device to help writers remember all of these questions.

For those writers adventurous enough to shoot their own films with their phones, the book also offers some sound technical advice, including proper lighting techniques, sound equipment, and camera tricks. The book also includes resources to find post-production tools, such as music, sound effects, and color correction. 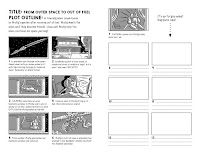 Since film is a visual medium, another key aspect of screenwriting involves visualizing each scene as you write it. At this point, the book of storyboard templates in this kit can be a valuable tool.

While most spec script gurus recommend against specifying camera angles in the script itself, using the storyboard templates can give writers a sense of the images they want to convey.

For instance, the storyboard shows a close-up of Bob shading his eyes with his hand, while the script can read, “Bob shades his eyes against the setting sun.” The writer never needs to mention “CLOSE UP” in the script.

The days of the lonely screenwriter, sitting in a coffee shop, and pecking away at a laptop in hopes of selling a million-dollar screenplay are all but dead. Instead, producers and agents want to see how a writer’s vision can translate into a finished product.

In my case, I had a lot of help from some talented people who assembled my scripts into short films. These films showed clients that, not only could I write a quality script under a tight deadline, but that I had people who believed in my skills enough to invest their own time and money into my talents.

When you make your own film, whether it’s by yourself with your phone, with a handful of friends in your backyard, or with a cast and crew of thousands, you can show those decision-makers that your vision, your talent, and your creativity and worth their time and money.

If you’re ready to turn your idea into a script, Story Into Screenplay can help. We offer script consultations, coverage reports, and rewriting services for scripts in all genres and at all stages.

For more information, contact Story Into Screenplay at storyintoscreenplayblog(at)gmail(dot)com, fill out the form on this page, or send us a message through our Facebook page.

Posted by Story Into Screenplay at 4:30 PM