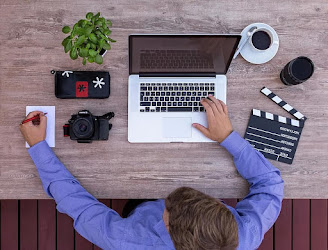 One of the steps an aspiring screenwriter should go through on the way to improving their skills is to submit their script for a coverage report.

As a coverage reader for Coverfly, the Austin Film Festival, and for private clients, as well as a former screenplay contest judge, I've read hundreds of spec scripts in nearly every genre.

In many cases, I can judge the quality of a script before I even start reading it. In others, it may take five or ten pages. Within the first fifteen pages, I can tell whether a script will be a fun read or a test of mental endurance.

Here are the Top 10 Pet Peeves of a Professional Script Reader:

If I get a feature script that's more than 110 pages, I start to feel dread.

If you can't tell your story in under 120 pages, you need either to cut it down before submitting it or stretch it out into a longer form, such as a novel or TV series. 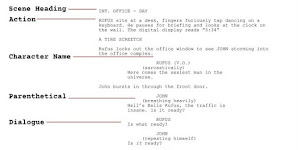 Spec screenplays have a very specific format. If you think that the format "restricts your creativity", then you should look at another form of storytelling.

A lack of proper formatting shows that you don't want to play by the rules.

When you get on the level of a Tarantino or Apatow, you can afford to thumb your nose at the rules.

When you're Joe Nobody with only one script under your belt, you play by the rules or you don't get to play at all.

This also goes for rules regarding ALL CAPS, bold type, or italics. Spec scripts should have exciting stories, but the type should be as plain as possible.

If you want to market yourself as a writer, you have to show an understanding of proper writing techniques.

When you submit a script with spelling and grammar errors, it tells me as a reader that you didn't care enough about the script to take the time to have it proofread. If you didn't care about it that much, then why should I?

Also, spellcheck is not the be-all/end-all of proofreading. If I see one more "you're/your" or "their/there/they're" mistake in a script, I won't need a quarantine haircut, because I'll pull all my hair out.

Long Stretches of Dialogue or Description

Spec screenplays are visual blueprints of the story.

When I see a column of continuous dialogue that fills half a page or more, I want to take a hacksaw to my monitor and chop it down to size.

When I see a paragraph of flowery description, I want to trade the hacksaw for a chainsaw.

White space is your friend. Break up the dialogue and description into bite-sized pieces rather than king-sized chunks.

Don't TELL me John is smart. SHOW him doing something smart.

Don't TELL me Mary is devious. SHOW her doing something devious.

Don't TELL me Mr. Moneybags is a sadist. SHOW him doing something sadistic.

The same goes for including character emotions in descriptions.

"He feels sad. She's scared. He's overjoyed at the news."

Kill these with fire! 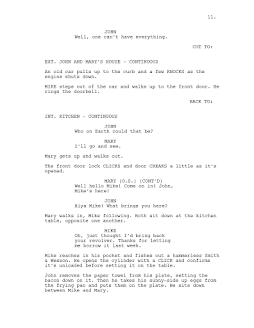 This pet peeve falls under the formatting category. A new slugline indicates a change in the scene, which implies a cut. The script doesn't need a "CUT TO" at that point.

The same goes for "MATCH CUT" or "SMASH CUT" or "CROSS CUT" or any other editing cues.

If your script is so complex that you need to explain how it works to a producer or director, then you might want to look at simplifying the story.

Most producers and directors disregard these notes and shoot the story based on the resources they have available, not based on the writer's demands.

Unless you're producing and shooting your script all by yourself, you don't get to "direct from the page".

This trope is especially prevalent in science fiction and fantasy scripts, when the writer needs to explain how the world works. It also appears in other types of stories when a character needs to relate backstory to the audience, such as using a TV or radio report in the background to convey information.

This trope also serves as a prime example of the "long dialogue" issue. The writer uses a character to lecture to the others (and to the audience). This kind of dialogue is a drag to read, as it takes away any dramatic tension from the scene.

Some writers want to get creative and write their dialogue in a dialect or accent. These attempts often make the dialogue unreadable. The same principle applies to dialogue in a language other than English.

Some scripts try to use only the foreign language, while others try to include both English and the foreign language in the same dialogue block. The job of reading scripts in English is hard enough without needing to consult Google Translate or reading the same line twice in two different languages.

Now that you know about the problems that could hurt your score on a coverage report, I'll bet you want to know all about the solutions to these problems.

That's where Story Into Screenplay can help!

You can see how Story Into Screenplay can work for you by taking advantage of this offer:

Get a professional evaluation of the first ten pages of your feature film or TV pilot script for only $10.

For more information, email Story Into Screenplay at storyintoscreenplayblog[at]gmail[dot]com with the subject "10 Pages for $10 Special ''.

You can also send a direct message to the Story Into Screenplay Facebook page and mention the special.

To see a sample coverage report, check out this evaluation of the screenplay for "Spider-Man: Into the Spider-Verse".

Don't "pass" up this opportunity.

"Consider" this a chance to work with an experienced, professional screenwriter and script reader.

Be sure to "recommend" this and other articles to your screenwriting colleagues.

Posted by Story Into Screenplay at 8:55 AM