Screenwriting with the VOTE Method: The Hate U Give (2018)

The new film The Hate U Give is based on the 2017 young adult novel by Angie Thomas. The screenplay by veteran writer Audrey Wells (Shall We Dance?, Under the Tuscan Sun) effectively shows how the lead character, Starr Carter (Amandla Stenberg), attempts to keep the two worlds in which she lives separate, but also how circumstances beyond her control bring those worlds into conflict.

In this post, we'll look at how the writer creates strong characters by examining the story through the lens of the VOTE Method. The point of this analysis is not to criticize the film or its messages, but to show aspiring writers how they can create memorable characters in their own stories by using the VOTE Method, as well as how it can be applied to contemporary films.

Starr Carter (protagonist)
FIRST HALF
Victory: Starr's Victory is to keep as much separation from her African-American, lower-middle-class home life separate from the white, upper-class world of her private school.

Obstacles: Her primary Obstacles come from people on both sides of her life. At home, she must deal with her ex-drug dealer father Maverick (Russell Hornsby), her overprotective mother Lisa (Regina Hall), and her friend Kenya (Dominique Fishback). At school, she tries to deal with her friend and teammate Hailey (Sabrina Carpenter) and her boyfriend Chris (K.J. Apa).

The biggest Obstacle occurs when her childhood friend Khalil (Algee Smith) is shot by a white police officer as he was giving her a ride home from a party. Starr's neighborhood erupts in protests, led by an activist attorney (Issa Rae) who urges Starr to come forward as a witness to the shooting.

Tactics: Her primary set of Tactics come from the creation of a second persona, which she calls “Starr Version 2”. In a voice-over at school, she describes how “Starr 2.0” never uses slang and avoids confrontation to keep from being seen as “ghetto”.

After the news reports on the shooting and the subsequent protests, Starr tells her school friends that she doesn't know Khalil.

Energy: Starr gets her Energy from her desire to satisfy her mother's dream of her going to college and getting out of the “hood”.

These all hold until near the film's midpoint, when Starr sees the reactions on both sides to her friend's death. Her African-American friends and neighbors use the tragedy as a call to action, while the white kids at her school treat it as an excuse to cut class.

SECOND HALF
Victory: Starr's Victories are to see Khalil's killer brought to justice and to speak for her lost friend.

Obstacles: Starr's Obstacles come from both sides of the law. On one side, a justice system that is hesitant to indict a white police officer for shooting an unarmed young African-American man. On the other side, she has to face down King (Anthony Mackie), the leader of the neighborhood gang, who was using Khalil to sell his drug shipments.

At school, she must also deal with rising resentment among her white classmates, including Hailey, who maintain that the white officer was justified in the shooting, in spite of what Starr saw that night.

Tactics: Starr's Tactics include speaking out anonymously in the media, testifying before a grand jury, and joining in the protests against police brutality.

At school, she shows Hailey how a hairbrush can be mistaken for a weapon and forces her into the same position of fear and terror she felt that night.

Energy: Starr gets her Energy from her need to honor Khalil's memory and to see justice done for her friend, her family, and her neighborhood.

The Hate U Give shows how a protagonist can have an intense desire to achieve a Victory in the film's first half, then have it flipped in the second half. When your protagonist learns that they have been chasing the wrong desire halfway through your story, you can use that moment of revelation as a turning point for the character, as well as a dramatic hook for your audience.

If you need help with building strong characters for your script, contact Story Into Screenplay. We offer script coverage reports, rewrite services, and one-on-one consultations. For a list of services and prices, please email storyintoscreenplayblog(at)gmail(dot)com, or send a message to our Facebook page.


Gerald Hanks from Story Into Screenplay will be appearing at the Louisiana Comic Con in Lafayette, Louisiana, on Saturday, October 6, and Sunday, October 7. 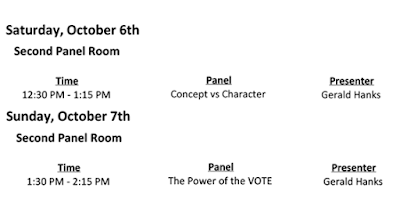 Gerald will be presenting two panels:

Concept vs. Character: Where to Start With Your Comic Book, Novel, or Screenplay
Saturday, October 6th at 12:30PM

The Power of the VOTE: How to Create Strong Characters for Your Comic Book, Novel, or Screenplay
Sunday, October 7th at 1:30PM

Both panels will be in the Second Panel Room at the Cajundome Convention Center.

Get your advance tickets online or at the Cajundome box office today!

Posted by Story Into Screenplay at 1:13 PM