Baseball, Screenwriting, and "The Writer's Journey": First Base 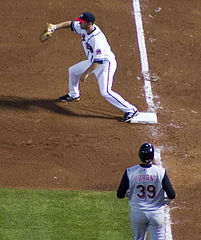 Just as baseball rules allow the runner to reach first base in several ways, the rules of the screenwriting industry allow for numerous ways to get past the initial gatekeepers.

In screenwriting, if the writer "connects" with a compelling premise, the writer's skills represent their likelihood of getting to "first base". If a writer doesn't understand character development, story structure, or basic grammar, spelling, punctuation, and formatting, they'll never get out of the batter's box.

As a script analyst, contest judge, and coverage writer, my job resembles that of the first baseman. My tasks involve making sure that substandard scripts don't advance to the next base.

As a script consultant, I also act as a first-base coach. My job involves advising writers on how to develop their scripts, execute their timing, and improve their chances of getting the script to the next stage.

Tomorrow, we'll look at how to reach "second base": getting a manager or agent.

This week, Story Into Screenplay is offering a professional analysis of the first ten pages of any screenplay (TV pilot, short film, or feature film) for only $10.

For more information about this offer, email storyintoscreenplayblog(at)gmail(dot)com with the subject “10 Pages for $10” or fill in the form on this page.

Posted by Story Into Screenplay at 12:00 PM