Baseball, Screenwriting, and "The Writer's Journey": Second Base 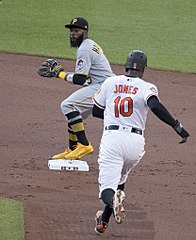 In baseball, a runner can reach second base either by waiting for his teammate to hit behind him or by creating an opportunity for himself to steal second.

In either case, he'll have to get past the second baseman, either by outrunning the throw or avoiding the tag. If he makes it to second, he's said to be in “scoring position”, which means that he's likely to score on any base hit from a teammate.

If script evaluators are the industry's first basemen, the gatekeepers at the various agencies and management companies are the second basemen. These assistants, interns, and office staff get paid to keep a newbie writer from getting into scoring position with their bosses.

If you have worked with your first base coach to create the best possible version of your script, you can reach second base by getting a manager to help you navigate your career. While an agent can help you negotiate a deal when you land one, a manager can help you find opportunities either to sell your specs or to land a writing assignment.

Query letters, networking events, screenwriting contests, and professional conferences such as the Austin Film Festival (which I will be attending later this month) all provide highly skilled writers with opportunities to make contacts and reach "second base" in their careers.

Check in tomorrow to see how to reach third base: getting connected with a producer.

This week, Story Into Screenplay is offering a professional analysis of the first ten pages of any screenplay (TV pilot, short film, or feature film) for only $10.

For more information about this offer, email storyintoscreenplayblog(at)gmail(dot)com with the subject “10 Pages for $10” or fill in the form on this page.

Posted by Story Into Screenplay at 12:00 PM